You are here: Home>Places>Kensington>Germans at Olympia 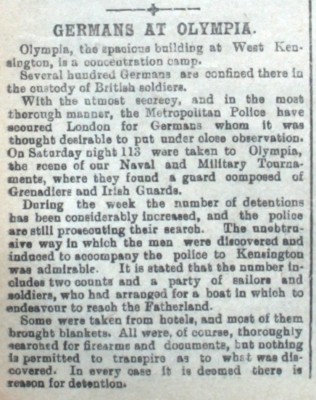 A transcription of the article

Olympia, the spacious building at West Kensington, is a concentration camp.

Several hundred Germans are confined there in the custody of British soldiers.

With the utmost secrecy, and in the most thorough manner, the Metropolitan Police have scoured London for Germans whom it was thought desirable to put under close observation. On Saturday night 113 were taken to Olympia, the scene of our Naval and Military Tournaments, where they found a guard composed of Grenadiers and Irish Guards.

During the week the number of detentions has been considerably increased and the police are still prosecuting their search. The unobtrusive way in which the men were discovered and induced to accompany the police to Kensington was admirable. It is stated that the number includes two counts and a party of sailors and soldiers, who had arranged for a boat in which to endeavour to reach the Fatherland.

Some were taken from hotels, and most of them brought blankets. All were, of course, thoroughly searched for firearms and documents, but nothing permitted to transpire as to what was discovered. In every case it is deemed there was reason for detention.