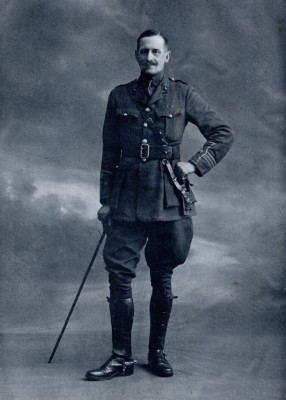 ‘The Regiment doesn’t now exist’. Exhausted, depressed, this is the opening of the letter Lieutenant Colonel Randle Barnett Barker wrote to the William Davison, the Mayor of Kensington, on 30th April 1917.

The Mayor of Kensington would have been distraught to hear such harrowing news. He was the one who had raised the 22nd Battalion of the Royal Fusiliers, also known as ‘The Kensingtons’, rallied recruitment meetings and mounted a campaign to encourage men to join up, using striking posters such as the one below.

The Mayor of Kensington was assiduous in his efforts to make sure they were well equipped, ordering and paying for uniforms out of his own pocket from the last supplies of khaki Harrods had. He sent them briar pipes at Christmas and in one of the scrapbooks he kept he pasted a copy of this magazine, which would have been sent out to amuse the troops at the front.

The bearer of the bad news about the Battalion’s near annihilation, Colonel Randle Barnett Barker, was a career soldier who’d served in India but retired from the Royal Welsh Fusiliers in 1906. Born in 1870, he was 46 at the time of writing the letter and he was the Lieutenant Colonel of 22nd.

Colonel Barker can be seen reading the lesson from his wooden stand at the camp in Roffey near Horsham. This is where the 22nd were based before they embarked for France on 6th November 1915.

The figure who stands out on the right is Captain Alan McDougall, who, according to G.I.S. Inglis’s excellent and exhaustive book, The Kensington Battalion, would be killed during the heavy shelling of Delville Wood in the early hours of 4th August 1916. Parties searching for his body came back empty-handed until a boot sticking out of the ground was recognised and his body recovered. The light and composition make this a sombre scene.

Below, the Kensingtons at Roffey:

Note that the picture has been marked up with crosses and ticks after the war to indicate those who died and those who survived.

Here the Kensingtons can be seen practising digging trenches, a skill which would prove vital when they reached France.

The offensive, which was to prove so disastrous for the 22nd, was the struggle for Oppy Wood. This was a dense patch of forest which contained nests of German machine guns and trench mortars. In May 1917, the 22nd Battalion had failed to dislodge the Germans from this strategic position and casualties had been high. And to top it all the Germans had launched gas attacks to finish off any survivors lying out wounded in No Man’s Land. Colonel Barker’s letter to the Mayor of Kensington continues in an unsurprisingly despairing vein, ‘I am very depressed at losing all my gallant friends … Haven’t closed my eyes for 48 hours, so tell any doctor that says it’s an impossibility that he’s a liar’.

On Friday 4th May 1917 The Times reported, ‘The battle has flared up again, and the Germans are again getting heavy punishment’. Unfortunately, as we have seen, this was not entirely what the under-strength 22nd Kensington Battalion of the Royal Fusiliers were dishing out.

In his official report, Colonel Barker writes, ‘I wish to place on record the splendid gallantry of Second Lieutenant Jeffcoat…It was entirely owing to the excellent report he sent me on the situation that I was able to push up the 23rd R. Fus. and so capture practically the whole of the objective given me.’ However, in a second letter to the Mayor he provides a less sanitised account: ‘He was running about on top of the trench, encouraging the men, till he fell blown to bits. They brought him to my Headquarters. He had one leg blown off and the other half off. Half his face was gone and one eye… I told him I would move Heaven and Earth to get him a VC.’ Colonel Barker adds, ‘I am sick of these bloody battles and everything connected with them’.

This usually stoical man adds, ‘This murder of heroes is appalling. I have had my Regt. more or less wiped out 3 times besides heavy casualties in other battles, but this last time to have it annihilated is more than I can bear – 60 men at the outside left…’ A full battalion would have numbered 1007 men.

However, according to The Kensington News later that month, there were some bright spots for the 22nd Battalion – tales of gallant self-sacrifice amongst the slaughter.

However, the story behind this impressive display of leadership was rather different, as Colonel Barker records on 6th May 1917.

The newspaper account allows the more obvious assumption that this was a German bomb when actually Barker’s letter reveals this to have been an unlucky accident during grenade throwing practice. Rather than ‘rushing forward to seize the bomb and throw it out’, Barker’s account reports that the Corporal was trying (very sensibly) to run away. The newspaper account concludes that ‘by sacrificing himself Lieutenant Wright saved his men from the full effects of the explosion’, whereas Barker reports that the trench was empty except for the two men. He writes that Lieutenant Wright ‘was an extraordinary brave and plucky fellow but a damned fool’, a truth which feels much more human than the newspaper account of daring-do and noble sacrifice.

This picture from a periodical shows  Barker and his men in action.

The 22nd Battalion never really recovered from the heavy losses it sustained and was disbanded on 5th February 1918. The Mayor of Kensington wrote to Field Marshal Douglas Haig on 6th February pleading for the Battalion to be kept together but it was too late.

Six weeks after the Kensingtons were disbanded, Barker was killed during the Second Battle of the Somme on 24th March 1918. The entry in the Brigade HQ diary reads simply, ‘Shells began to fall in and around Guendecourt at 5.45pm. Brigadier General R. Barnett Barker, DSO and Captain E. I. Bell, MC (staff Captain) were killed by a shell.’ It would be another eight months before the end of the First World War.

No one who fought in WW1 now survives, so this Centenary is a crucial point at which lived events start to crystallise into history and we begin to decide how this war will be remembered.

Randle Barnett Barker’s letters suggest that war is more confused and horrifying than any neat re-creation of black lines pushing across on a map can convey and for this, for his honesty and for returning to these events a human dimension, we owe him a great debt. It’s hard not to discern in these letters a lesson in the messy futility of war. Siegfried Sassoon puts it better than anyone could:

And tell Him that our politicians swear

They won’t give in till Prussian Rule’s been trod

Under the Heel of England … Are you there? …

Yes … and the war won’t end for at least two years;

But we’ve got stacks of men … I’m blind with tears,

Staring into the dark. Cheero!

I wish they’d killed you in a decent show.

Comments about this page