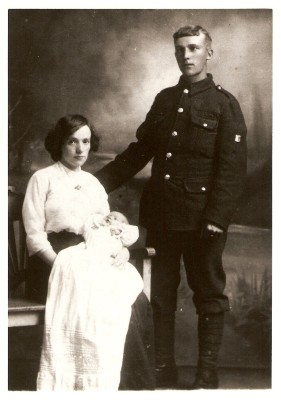 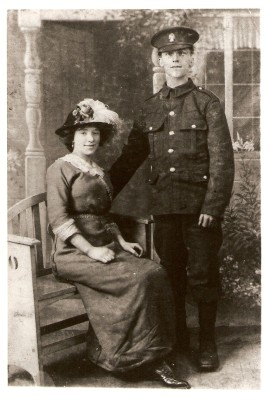 Bill Fahey was interned in a prisoner of war camp in Minden, Germany when the Armistice was declared in November 1918. This labourer from the London Gaslight and Coke Company in Ladbroke Grove was a long way from home.

They married at Our Lady of the Holy Souls Church in Bosworth Road W.10 on 6th September 1914. At the Time Bill was living at 46, Hazelwood Crescent, W.10 and Mabel at 45, Southam Street, W.10, they then set up home at 46, Southam Street. This area of the Borough is known as Kensal New Town. ( Southam Street has now been slightly re-routed and renamed Elkstone Road ).

When War broke out, Bill was working as a Labourer at the London Gaslight and Coke Co. in Ladbroke Grove (Sainsbury’s has now been built on the site). On being assured that there would be a job for him after the War. He enlisted in the 22nd Battalion Royal Fusiliers (Kensington) when they were raised by the Mayor of Kensington. Bill and Mabel’s first baby (another Mabel) was born the following August 1915. Three months later Bill embarked for France with the Battalion; it is not known if he took any of his leave back in England, so presumably did not to see his Wife and Daughter again for another 3 years.

With her Husband away at War, Mabel had to provide for their Daughter and so found employment at the large Dairy in Shirland Road. W.9 owned by United Dairies. Mabel’s Mother and Father, William and Clara Derbyshire, and one of her sister’s, Dora Goodger, all living in Southam Street, helped out with looking after baby Mabel.

Meanwhile Bill served with the ‘Kensington’s’ throughout the War and was awarded the Military Medal for bravery, before the Battalion was dis-banded in February 1918. He was transferred to the 24th Battalion Royal Fusiliers, but three days later was captured by the Germans and spent the last 8 months of the War at Minden POW camp, Germany where he came across another Soldier from North Kensington who had been a prisoner since 1914. Bill was repatriated quite quickly and was home before the end of November 1918. His clothing had to be incinerated due to the poor state and lice. On meeting her Dad, young Mabel who was now 3 years old asked her Mum if that Soldier was going to sleep in their bed!

Bill enquired at the Gasworks regarding his old job and was informed that there were no vacancies, so with a young family to support he would earn a living doing any odd jobs available. Later Bill would start his own business buying and selling second hand goods.

Bill died in November 1957 and Mabel in July 1968. They are buried together at Kensal Green Cemetery, Harrow Road N.W.10

His War medals are now on display at the Fusilier Museum, H.M. Tower of London.

Comments about this page