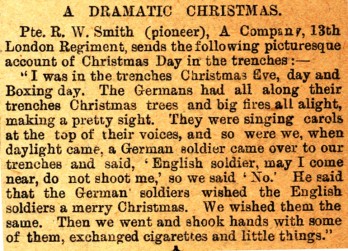 'A Dramatic Christmas' 1914
The Kensington News 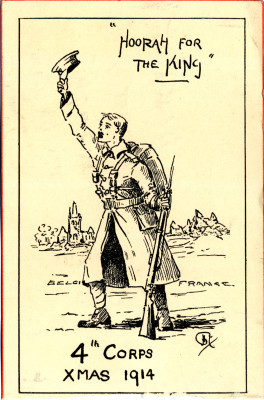 The 1914 Christmas Truce involved British and German soldiers serving on the  Western Front. This extract of a letter sent by Pte. R. W. Smith describes his experience of The Truce while he was serving with the 13th (Princess Louise’s Kensington) Battalion – London Regiment. At this point Pte. R. W. Smith was serving in the line at Picantin.

The following extract is from the Regimental History of the 13th London Regiment:

‘It was the first Christmas of the war and the enemy, no less than ourselves, felt very homesick […] We all looked at the enemy’s line, which was dotted here and there with clusters of lights. From behind the lights came voices crying “English soldiers, English soldiers, Happy Christmas. Where are your Christmas trees?” […] The batallion on our right, the Royal Irish Rifles, with their national sense of humour, answered the enemies’ salutations with songs and jokes, and made appointments in No-man’s-land for Christmas Day […] Over we went into No-man’s-land. Apart from the officers, the Germans we saw were strangely old. We took with us bits of Christmas pudding, tobacco, cigarettes, and other oddments, but were ordered to preserve the identity of our regiment by giving away our badges or buttons. The “enemies” shook hands cordially and gifts were exchanged (and occasionally conversations, chiefly relating to hotels in the West End of London). The Germans were amazed at our youthfulness as we were at their advanced years.’